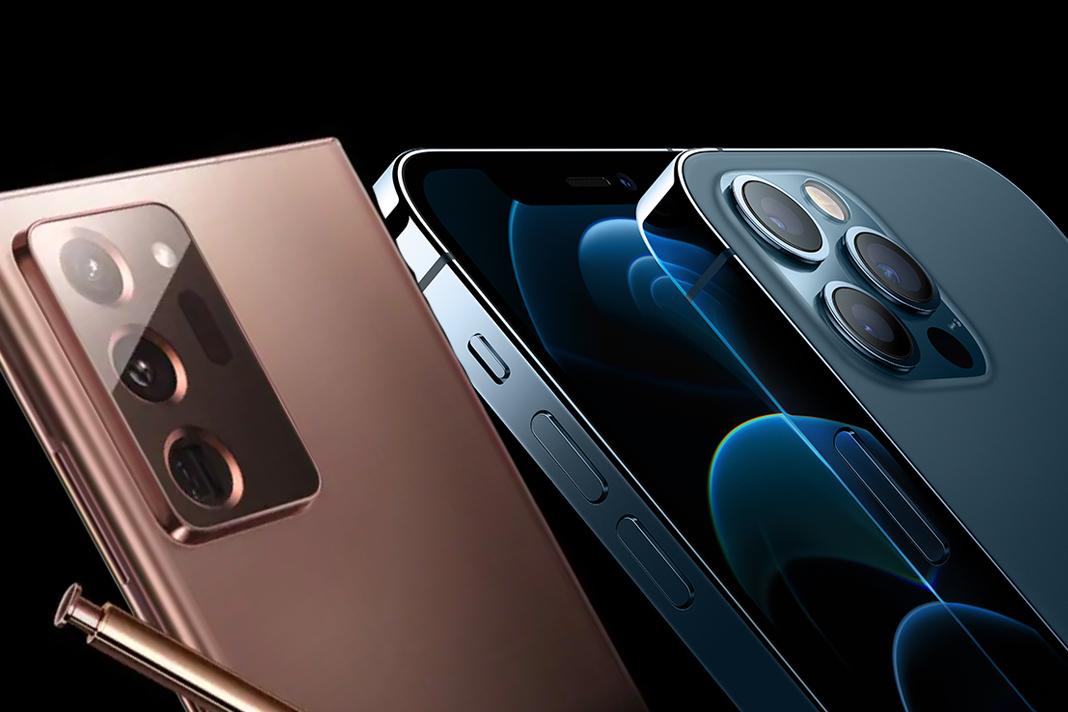 The top model of the iPhone 12 series is known as iPhone 12 pro, and similarly, the Top Model of the Samsung note 20 series is Galaxy Note 20 ultra. Both the smartphones have extremely tempting cameras which have Ultra HD results in their landscape and portrait photos.

The comparison between Samsung note 20 ultra vs. iPhone 12 pro Max is listed in this article. The iPhone 12 pro-Max camera specs are the same as the camera specifications of Galaxy Note 20. Both have three lenses camera which is capable of performing even in low light with an advanced autofocus system.

The Price of the iPhone 12 Pro Max is quite high than Samsung Galaxy Note 20 Ultra. But people have their own choices regarding specs.

The iPhone 12 series specs are extremely tempting because of their high quality of cameras, which are considered the best all-rounder for taking photos and videos. The camera quality of the iPhone 12 pro is critically built on the strength of previous models of iPhones.

It has a much better and improved night mode, and most of all it autofocusses technology is extremely elegant. It’s HDR video quality is also something very amazing for its users.

The Galaxy 20 ultra-specs are highly rated mainly because of their camera quality, and that is the reason it is considered as King of zoom and pro modes. The Samsung note 20 series specification in terms of their camera is fantastic cause it has all the lightening conditions which one looks for in a five X optical zoom camera.

It has a great ultrawide and landscape camera, which gives extremely cool results for HDR photos. Also, the ultrawide cameras give well balanced and saturated short, and most of all, its zoom images are extremely clear.

The iPhone 12 pro-Max display is about 6.7 inches, having a built-in OLED retina. It has ultra HD resolution, and most of all, it displays full of colors, which offers its users a very lively experience.

The Samsung Galaxy Note 20 ultra-display is about 6.9 inches, having built-in Ultra HD resolution. Its display is a bit large as compared to the iPhone 12 pro-Max but offers almost the same experience.

The Apple A14 bionic is the processor in the iPhone 12 pro-Max, which is highly acknowledged in terms of performance. Its internal storage is about 128 GB, but it is also available in 256 and 512 GB. Its RAM is about 6 GB.

Its processor is Qualcomm Snapdragon 865 plus, which offers a very much satisfactory experience to its users, but the best thing about this series smart phone is it is 12GB of RAM. It is available in the internal storage of not just one 128GB but also in 256 and 512 GB.

The software comparison between both the series of smartphones is highly visible because the software which is used in iPhone 12 pro-Max is iOS 14. The battery life of this series smartphone is Lion, but the best thing about this battery is it is fast charging along with the availability of Apple wireless charger as well.

The smartphones in this series have software of android 10, which is the latest one available out there in the market. Its battery life is 4500 mash with the availability of fast charging. It also has the facility of wireless charging along with fast charging facility as well.

Both phones are powerhouses.

The best thing in the iPhone 12 series comparison and Samsung note 20 series review is their newsworthy battle, which is because of the strong features. There is no doubt that both smartphones are absolute powerhouses. The ratings are almost the same between both the series.

Performance is also ultimate, and there is literally no issue with either flagship. The price comparison between iPhone 12 series versus Samsung note 20 series is worthy of their features because most of the features are almost the same in both the devices.

Overall, both the series have highly advanced technical smartphones, which have a lot to offer to its users. The best thing about both the series is their camera quality and overall performance, which are almost the same.

The iPhone 12 series and Samsung note 20 series prices in Pakistan are also very much competitive. So, it is hard to pick one of the above-mentioned series because both the series have highly advanced processors with a high quality of performance.  But if you are looking for a series having better RAM, then the Samsung note 20 series is the perfect choice for you. Mohammad Ahsan - April 29, 2020 0
Redmi Note 8 series by the Xiaomi sub-brand Redmi is without a doubt a well known smartphone series over the globe. Presently, the Managing Director of...

Samsung will release OneUI 5 and Android 13 to S22 Series...